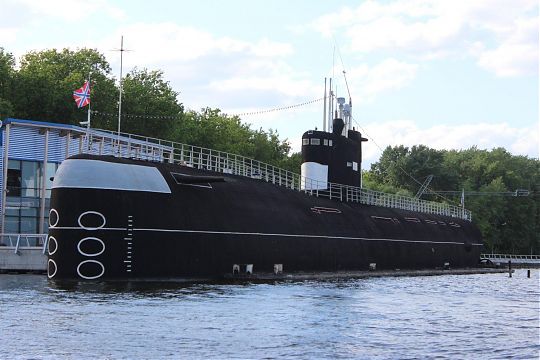 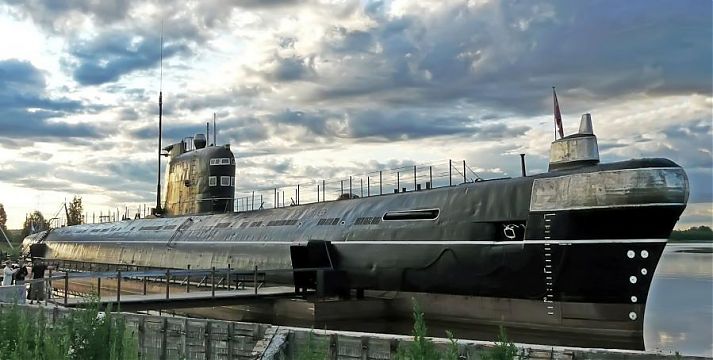 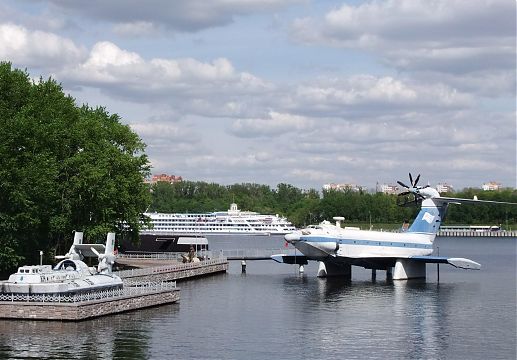 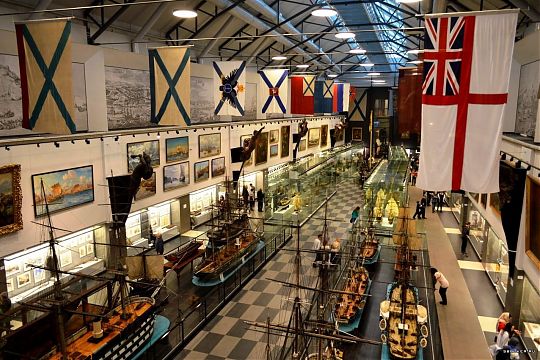 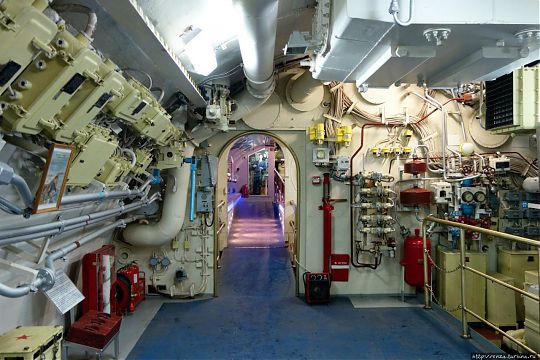 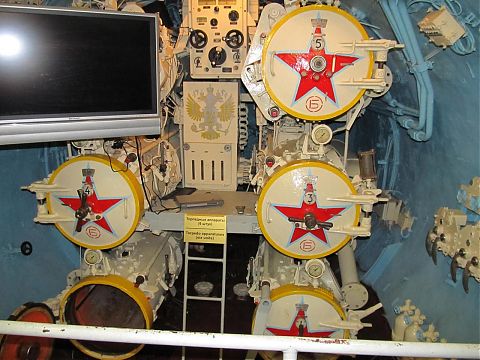 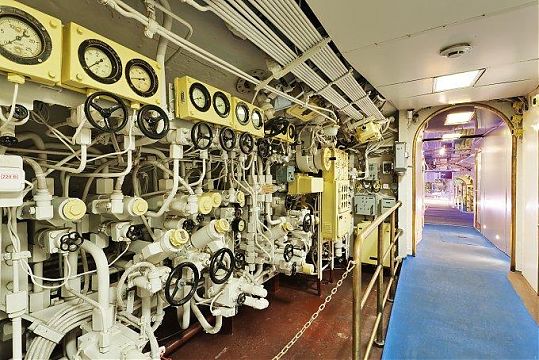 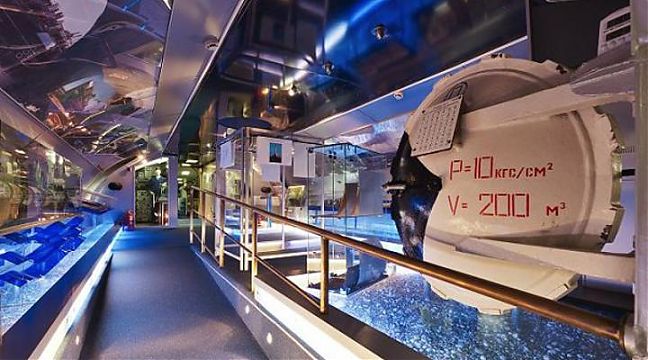 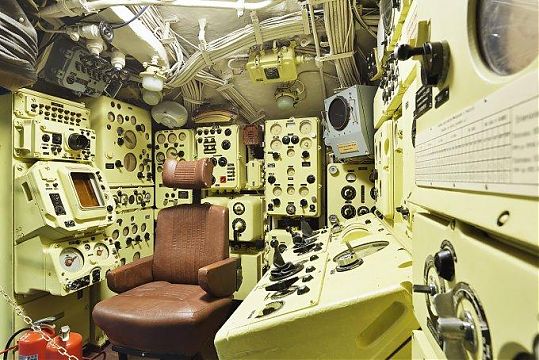 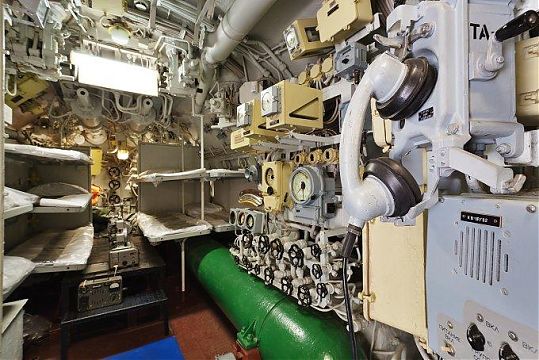 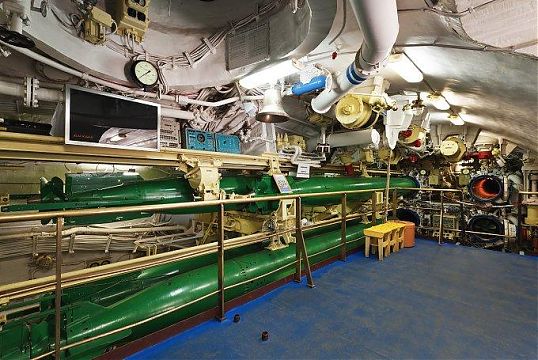 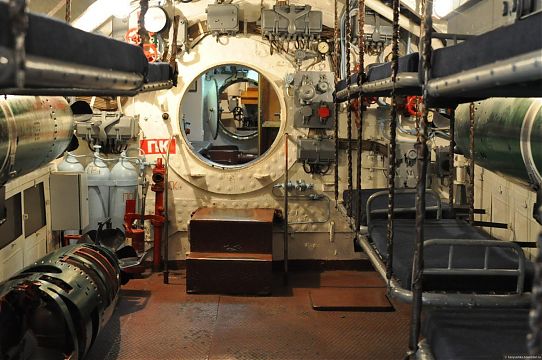 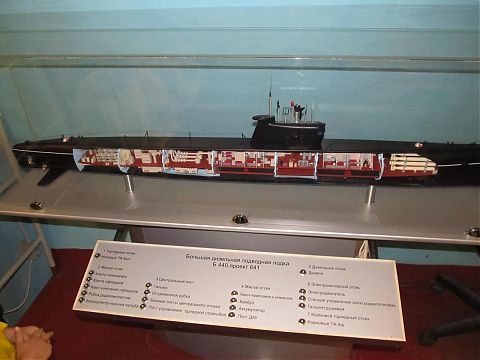 This interesting museum, a tour of which implicates a visit to one of the world’s biggest submarines, is located in the north-west of Moscow. On the way to the Russian Navy History Museum you will find an air assault hovercraft, a ground-effect craft Orlyunok, and a submarine a bit further away. These former fighting units are located along the Khimki reservoir embankment (Russian: Khimkinskaya naberezhnaya or Химкинская набережная). The ground-effect craft is a real flying ship of paratroopers which can take off and land with any sea disturbance. Unlike hydroaeroplanes ground-effect crafts can fly at low altitude not only above the water, but also above the ice, tundra, and wetlands.

You will have a tour of the museum first and then move on to the submarine. The display starts with the bow, the torpedo room with 8-metre self-guided torpedoes (real ones, without warheads though). There were 24 torpedoes in total when the submarine was on duty. Between them two-tiered beds for 14 people are squeezed. This is where you realise how cramped the space inside a submarine is! 70% of the equipment was removed while the submarine was being converted into a museum; otherwise guided tours would not be feasible.

The submarine has seven water-tight compartments in total. In the course of museum creation widened arched passages were made instead of manholes. They allow for people to move around in full height easily. But one of the manholes remained intact for anybody to get into a submariner’s shoes (in fact, they move from one compartment to another in a half-jump).

From the torpedo room visitors get to the overhead personnel’s compartment where they can see the captain’s and the officers’ cabins (they lived there by twos). Next goes the central control room, the think tank of a submarine. It is interesting that now you can see the ceiling all around the boat, while in the central control room it is covered in wires. This small section illustrates the way the submarine used to look like – wrapped in wires all around. You can see the captain’s, boatswain’s, navigator’s, soundmen’s, and mechanic’s work places in the boat too. The temperature of 31 degrees above zero was kept in all the compartments of the submarine. For this reason, all the man simulators are dressed in cotton clothes. All of them are not too high, because only men shorter than 1 m 70 are admitted to submariners.

The tour reveals details of the submarine history and performance. For this reason, if you are planning a visit with children, it is more suitable for children over 8. There are tours around the submarine’s upper deck, but children under 6 are not allowed.

Meeting point
We'll pick you up at your hotel (please let us know if you prefer a different meeting point)
How to get there?
Please make sure you are in your hotel's lobby for the tour at the agreed time, we'll take care of the rest!
Important information
Non-professional photography and video recording are allowed in the museum.