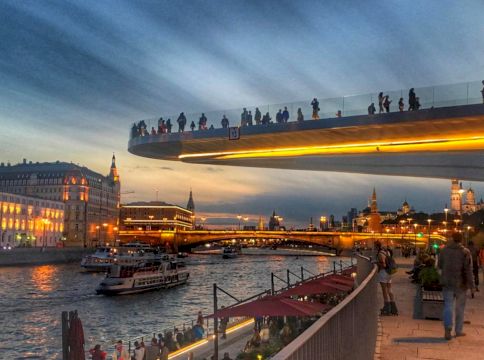 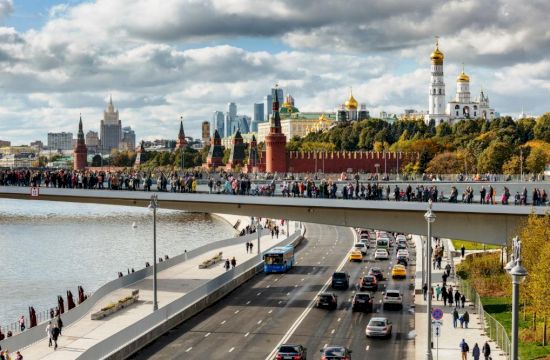 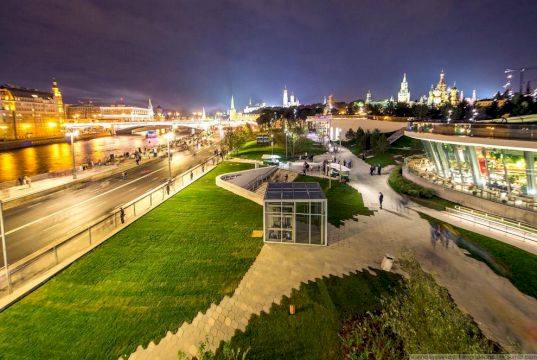 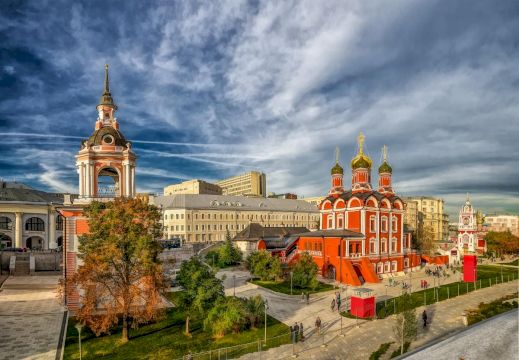 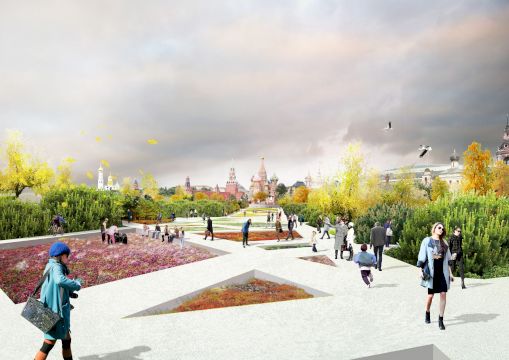 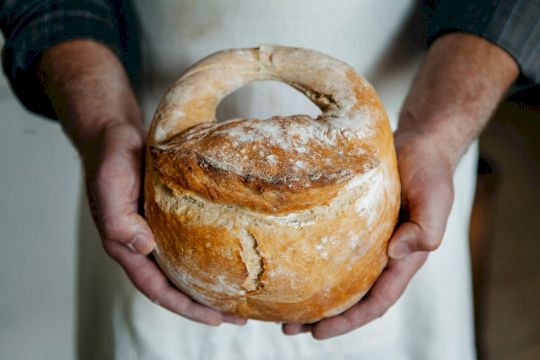 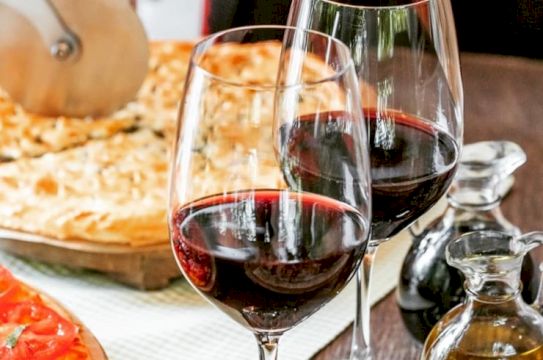 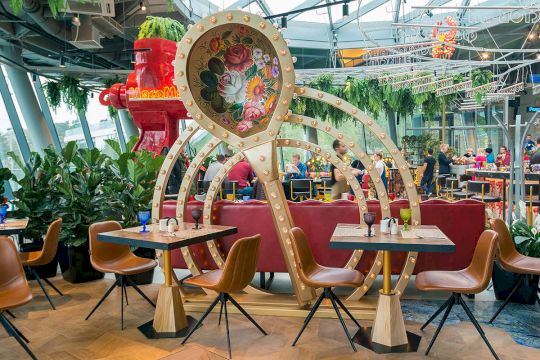 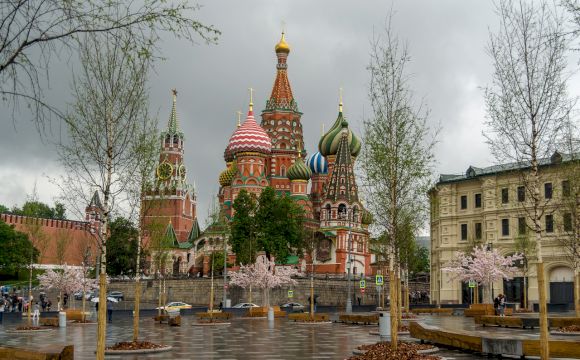 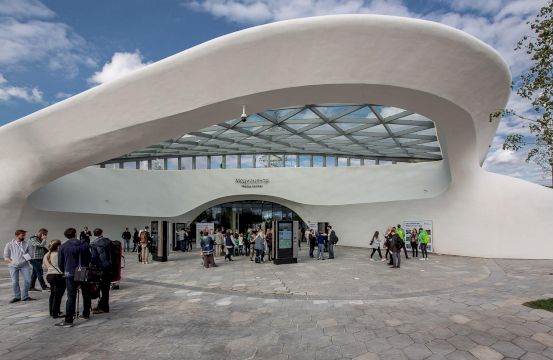 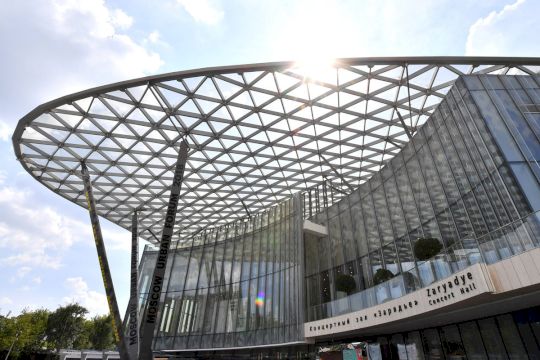 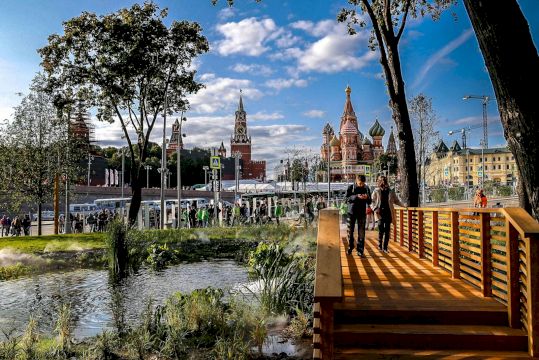 The 32-acre Park Zaryadye was a huge project that cost US$223.9 million, according to official figures. It was designed by  a consortium of international architects including  Hargreaves Jones (USA), Citymakers (Russia), and Diller Scofidio + Renfro (USA), known for using the ‘wild urbanism’ technique to merge historic city streets with wild natural habitats. The park has four different areas representing Russia’s main geographic zones – tundra, steppe, forest and wetlands – and featuring the typical micro-climates of each zone. In addition to that, there’s an ice cave (where the temperature will be kept below freezing year-round) featuring creations of Arctic ice artist Alexander Ponomarev.

Another much talked-about feature of Park Zaryadye is a so-called ‘floating bridge’, which spans the Moscow River and its embankment without support and loops back to the parkland. There will also be a large outdoor amphitheatre and a Philharmonic Hall, built into the hillsides. Other facilities include the interactive Media Centre and a 4D cinema where the history of Russia will unfold on a 360-degree screen; travel within Russia and its various national parks will also be promoted through videos and exhibits.

Remains of a street that was part of the medieval Kitay Gorod neighbourhood were excavated during the construction of the park, on the site of the old Rossiya Hotel, and various archaeological findings will now be exhibited in an underground museum within the park, including items such as old coins and medieval weapons.

The first element of the park to open to the public was the glass-dome Zaryadye Park Pavilion, created by architect Sergei Kuznetsov and presented at the 2021 Venice Biennale of Architecture. With QR-code décor, this so-called observation deck provides a virtual overview of the park’s development, and will remain as its information centre.

During the tour you will get to:

- visit the Dome Pavilion, located at the very entrance to the park from the side of Red Square. A relatively small glass building is also an information center and exhibition venue. The “Dome” interior is decorated with a huge number of QR codes: the codes contain links to the history of the park's creation, a guidebook on its territory, interesting facts about the historical district of Zaryadye and other useful information. Take your smartphone and snap away!

- take a trip in space and time - stroll through the picturesque territory of the park and get acquainted with its main architectural objects. Here, ultramodern buildings and structures peacefully coexist with ancient temples, creating a prototype of the city of the future. You will visit the four climatic zones of Russia, authentically recreated in the park, look under the “Glass Bark”, walk along the Floating Bridge, see the Media Center and the Nature Center.

Book
Meeting point
We'll pick you up at your hotel (please let us know if you prefer a different meeting point).
How to get there?
Please make sure you are in your hotel's lobby for the tour at the agreed time, we'll take of the rest!
Important information
We'll be happy to arrange transfer from your hotel to the Park and back, please see the Extras section in the booking form below.